“In a finding likely to add fuel to the debate over treatments for prostate cancer, proton-beam therapy provided no long-term benefit over traditional radiation despite far higher costs…”

You’ve been diagnosed with prostate cancer. Your oncologist explains his/her recommended therapy plan to you. You trust your oncologist so the plan must be right for you… right?  If the therapy plan includes “proton-beam treatment,” maybe not. Ask your onc to show you studies or reports that clearly indicate that proton-beam therapy will manage your prostate cancer better than regular radiation. If your oncologist is honest with you, according to the article linked and excerpted below, he/she will not be able to.  Keep in mind that proton-beam therapy will cost you and your insurance company much, much more than regular radiation.

Do you have a co-pay? Will you have to pay any of the treatment? Probably.

The newly diagnosed prostate cancer patient’s challenge is to learn of the many conventional (FDA approved) and evidence-based non-conventional therapies that may apply to their individual case.

I am a cancer survivor and cancer coach.  If you would like help with evaluating your prostate cancer treatment plan, scroll down the page, post a question or comment and I will reply ASAP.

“In a finding likely to add fuel to the debate over treatments for prostate cancer, proton-beam therapy provided no long-term benefit over traditional radiation despite far higher costs, according to a study of 30,000 Medicare beneficiaries published Thursday in the Journal of the National Cancer Institute.”

Proton radiotherapy uses atomic particles to treat cancer rather than X-rays and theoretically can target tumors more precisely. But it requires a particle accelerator roughly the size of a football field that typically costs about $180 million. 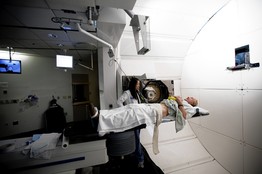 Faith in the superiority of proton therapy by some has sparked an arms race among major medical centers. Ten proton accelerators are in operation in the U.S., and nine more are in development, including two by the Mayo Clinic and one by Memorial Sloan-Kettering Cancer Center and a consortium of other hospitals in New York City.

Critics long have cited proton-beam therapy as a costly new technology with no proven advantage. Medicare pays over $32,000 per patient for proton therapy, compared with under $19,000 for radiation, according to the study.

Side effects of both can include incontinence and impotence, so researchers have sought potentially less-damaging therapies.

Proton-beam therapy has been the subject of heated debate among urologists, radiation oncologists and health-care cost analysts. The therapy isn’t considered more effective than standard radiation, or surgery, at stopping the cancer. And the patient experience is about the same as with standard radiation: Patients typically have daily treatments, Monday through Friday, for approximately eight weeks. Each treatment is painless, and lasts about five minutes.

The main debate has been over side effects.

There was no difference in the rate of other common side effects of radiation treatment for prostate cancer, including erectile dysfunction, hip fractures, gastrointestinal issues or musculoskeletal problems….”

Proton versus photon-based radiation therapy for prostate cancer: emerging evidence and considerations in the era of value-based cancer care

The introduction of proton beam technology and its physical advantage of depositing its energy in tissue at the end-of-range maximum may potentially spare critical organs such as the bladder and rectum in prostate cancer patients.

Data thus far are limited to large, observational studies that have not yet demonstrated a definite benefit of protons over conventional treatment with IMRT. The cost of proton beam treatment adds to the controversy within the field.

Methods: We performed an extensive literature review for all proton treatment-related prostate cancer studies. We discuss the history of proton beam technology, as well as its role in the treatment of prostate cancer, associated controversies, novel technology trends, a discussion of cost-effectiveness, and an overview of the ongoing modern large prospective studies that aim to resolve the debate between protons and photons for prostate cancer.

Results: Present data have demonstrated that proton beam therapy is safe and effective compared with the standard treatment options for prostate cancer. While dosimetric studies suggest lower whole-body radiation dose and a theoretically higher relative biological effectiveness in prostate cancer compared with photons, no studies have demonstrated a clear benefit with protons.

Thanks for keeping up the posts. How do you answer questions from week to week from someone ? Email?

To answer your question “how do you…” there is a spectrum of Q and A from one off questions daily based on any of the issues discussed in blog posts to more formal cancer coaching relationships involving q and a emails, phone, Skype, over months, years.

Oh Thanks. So anything or everything I guess depending.

So I assume you mean you answer questions on the website, but then you have to be ‘hired’ as you get more involved ?

how old is this post? I’m looking for REAL testimonials. My research and talking with a few who’ve had Proton therapy indicates and verifies that survivability rates are the same with all three treatments. Yet surgery in short is invasive and IMHO inherently becomes more risky. This without getting into the whole debate re: DaVinci surgery which has become the norm (and is also costly). Brief aside, re: cost…I think Proton Therapy is being more widely accepted by Insurance providers as long term recurrning costs are less. This because those I’ve talked to , with low risk (Gleason 7) scores had very little side effects after Proton Therapy. That said they are only 1.5 yrs. from treatment. Looking for someone similar who is 5 years post treatment. As for debate between Proton and IMRT therapy..to me, there is no debate. Radiation does just that ….radiates. Thus other areas (rectum for eg.) are being “hit”. Targeted Proton therapy IMHO thus is safer. I think the argument (from the pros) is monetary based. All this investment in costly technology only to have a new method challenge that investment. The big issue to me is there are only 15 centers in the U.S. so many seeking this treatment have to have an 8 week “Staycation” if choosing Proton. Would be extremely grateful if someone who has had Proton Therapy around 5 years ago would chime in on experience or contact me. Net is surgery was first option for me “get the cancer out of my body” until I looked at survivability rates…need to make my decision soon! Thanks in advance!!!

I am a long term cancer survivor who cancer coaches patients, survivors and caregivers. If you would like to hire me to provide actionable research for you about both conventional and non-conventional prostate cancer therapies I think you will find me extremely knowledgable.