Barrett’s Esophagus With No Dysplasia

From: George
Subject: BARRETT’S WITH NO DYSPLASIA 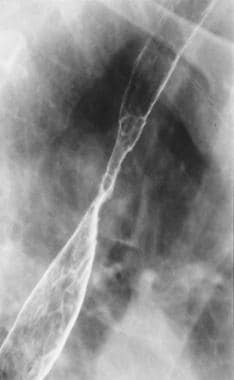 I was diagnosed with a slightly irregular z line during an endoscopy I had done in Nov 2013 because I had a sore throat for a month before and I took prilosec and it went away.

They did not see any evidence of barrett’s esophagus (BE) in my esophagus only a irregular z line and the biopsies taken showed intestinal metaplasia. I had it repeated in April of 2014 because they were not positive I had Barretts and the same thing again just showed up on biopsies of an irregular z line.

My doctor said I don’t need a scope until April 2017 and my cancer risk is 0.1% or less a year. I have read that 95% of people will never develop cancer.

I just can’t stop thinking about this whole situation even though my doctor said I have a better chance of being run over by a truck than getting cancer. What are your thoughts? Any suggestion on how I can cope with this situation?   George

Hi George-
On the one hand you are smart to think carefully about your health and on the other hand your doctor is correct. According to the article linked here, irregular z lines are common and there is little risk of cancer. There are many doctors who “over-treat.” You are fortunate to have a physician who does not.
Now, that is my logical answer. The emotional side of your concern deals more with the idea of “control” in health and cancer. Many people are willing to make a reasonable effort to add evidence-based therapies that studies show reduce their risk of cancer.
There are many therapies that you can follow that will reduce your risks of cancer in general and esophageal cancer in particular. I know this because I undergo many of these therapies myself. I credit my lifestyle with remaining in complete remission from my incurable cancer, multiple myeloma.
Evidence based therapies including:
1) anti-oxidant supplementation that are cytotoxic to EC (curcumin, omega-3 fatty acids, etc)
2) lifestyle therapies that are cytotoxic to EC- (exercise, meditation, etc.)
3) immune boosting therapies-
All therapies are inexpensive and require modest effort and time during the day.
Thanks
David Emerson

Curcumin: A Potent Protectant against Esophageal and Gastric Disorders

“Turmeric obtained from the rhizomes of Curcuma longa has been used in the prevention and treatment of many diseases since the ancient times. Curcumin is the principal polyphenol isolated from turmeric, which exhibits anti-inflammatory, antioxidant, antiapoptotic, antitumor, and antimetastatic activities.

The existing evidence indicates that curcumin can exert a wide range of beneficial pleiotropic properties in the gastrointestinal tract, such as protection against reflux esophagitis, Barrett’s esophagus, and gastric mucosal damage induced by nonsteroidal anti-inflammatory drugs (NSAIDs) and necrotizing agents.

The role of curcumin as an adjuvant in the treatment of a Helicobacter pylori infection in experimental animals and humans has recently been proposed. The evidence that this turmeric derivative inhibits the invasion and proliferation of gastric cancer cells is encouraging and warrants further experimental and clinical studies with newer formulations to support the inclusion of curcumin in cancer therapy regimens.

This review was designed to analyze the existing data from in vitro and in vivo animal and human studies in order to highlight the mechanisms of therapeutic efficacy of curcumin in the protection and ulcer healing of the upper gastrointestinal tract, with a major focus on addressing the protection of the esophagus and stomach by this emerging compound.”

Background: Epidemiologic studies suggest a reduced risk of esophageal adenocarcinoma in populations with a high consumption of fish, and n-3 fatty acids inhibit experimental carcinogenesis. One possible explanation is the suppression of eicosanoid production through inhibition of cyclooxygenase 2 (COX-2).

Objective: The objective was to determine the effects of dietary supplementation with the n-3 fatty acid eicosapentaenoic acid (EPA) on a number of biological endpoints in Barrett’s esophagus…

Results: The EPA content of esophageal mucosa increased over the study period in the n-3-supplemented subjects and was significantly different from the content in the controls (P < 0.01). There was also a significant decline in COX-2 protein concentrations (measured by immunoblotting) in the n-3 group, and the difference was significant from that in the controls (P < 0.05); no difference in COX-2 RNA concentrations was observed between groups.

This change in COX-2 protein was inversely related to the change in EPA content (P < 0.05). There was no significant difference in the change in prostaglandin E2, leukotriene B4, or cellular proliferation between the 2 groups.

I have some personal questions about this. Can you message me? Long story short- had three or four scopes done with dilation found rare pancreatic tissue and did another and suggestion get it every three years. Well last month had vomiting a lot of it and had unplanned one- Barrett esophagus found without dyplasia and because I have symptoms have issues even after he dilated should I be really concerned?

My endoscopy in 2013 showed severe erosion in my esophagus. My Dr. felt sure it was Barrett’s on sight. However the pathology report ruled out Barretts at that time. So I went through that horrible scare of this is a lethal cancer if it turns cancerous then. I just had my follow up and it has changed to Barrett’s esophagus.The literature on very reputable sites on the web are far more positive than 3 years ago. There’s many treatments available now. There is a Barrett’s Esophagus Fellow in a hospital near me. That’s where my Dr. is sending me in 6 months. I still had acid reflux, and vomiting, thru this 3 years, while on Nexium, or Prevacid.I’ve had acid reflux for 30 years. My Dr. today, told me that this isn’t my fault. It just appears in some people.There is no cancer history in my family. I’m a non-smoker and a non-drinker. She said that puts me on the low end of the elevated risk for developing ademacarcinoma.It’s still so scary and hard to stop worrying about.I see other people expressing that same anxiety.It is like living with a ticking time bomb. I have about 3-4 more years to retire. I just keep thinking what if I don’t make it, after working a lifetime? That seems selfish, because many people don’t live to enjoy retirement. Will I ever calm down? Thanks for listening to me.

I replied to your email.