As a class, Non Small Cell Lung Cancer is relatively insensitive to chemotherapy…Therefore think outside the Therapy Box-

The above  is Wikipedia’s definition of NSCLC. Right off the bat, the reader must wrap his/her head around the 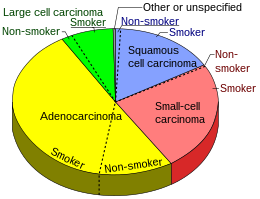 fact that conventional chemotherapy probably will do little to stop their cancer.

The solution? Think beyond the conventional oncology box. I am a long-term survivor of an “incurable cancer” called multiple myeloma. After several years of high-dose, aggressive chemotherapies failed to stop my cancer, I turned to evidence-based, non-conventional therapies. I have been in complete remission since April of 199

If you look beyond conventional lung cancer therapies you will find many evidence-based choices. Combining platinum-based chemotherapies with curcumin, for example, will enhance the efficacy of the chemo while reducing it’s toxicity.

Based on research over the past 10 years, curcumin

and other non-toxic therapies have shown anti-cancer activity by themselves. This anti-cancer action is enhanced when curcumin is combined with therapies such as green tea (EGCG) or with conventional chemo such as cisplatin.

My point is NSCLC, at any stage, is difficult to treat. Especially if you want to think long-term. You owe it to yourself to think beyond conventional therapies.

Have you been diagnosed with lung cancer? What stage?

For more information about integrative or complimentary  lung cancer therapies, scroll down the page, post a question or comment and I will reply ASAP.

One of the few challenges to curcumin supplementation is that it is not bioavailable meaning the body doesn’t ingest much of the curcumin capsule that you eat. The study linked below cites the ability of (-)-epicatechin (EC), a component of green tea, to enhance the anti-cancer action of curcumin in lung cancer.

New role of (-)-epicatechin in enhancing the induction of growth inhibition and apoptosis in human lung cancer cells by curcumin.

“Based on our evidence that (-)-epicatechin (EC), an inert catechin, enhances the cancer-preventive activity of green tea catechins, we studied the enhancing effects of EC on inductions of growth inhibition and apoptosis in human lung cancer cell lines PC-9 and A549 with curcumin. The combination of curcumin with EC significantly increased the inhibition of cell growth compared with curcumin or EC alone…”

Thanks for the information. I also have decided not to take the maintenance chemo drug Revlimid. My oncologist wasn’t real happy about my decision but agreed that it was my decision to make. I recently found out I am in remission after my stem cell transplant. I have been taking curcumin daily and was drinking green tea. But I ordered the green tea supplement you suggested.
Currently I am trying to rebuild my immune system. Are you taking an immune booster?

Sorry, I just read this after I replied- no problem.

Where can you purchase curcumin and green tea extract?

I purchase both products through Amazon. I purchase “Doctor’s Best Curcumin” as each capsule contains 5mg of bioprene (black pepper) which has been shown to increase the bio-availability, how much curcumin gets into the blood. I buy the green tea extract based on the daily amount. I will include the links to the Amazon pages. If you go to Amazon through the links and make a purchase, the Galen Foundation dba PeopleBeatingCancer receives 5% of the purchase price. There is no increase in price to you, PBC gets a small percent based on our “associates program.”

It’s up to you. Good luck and let me know if PBC can do anything for you.
thanks
David Emerson