Please don’t undergo a complicated medical procedure without first understanding its risks and benefits. I followed my oncologist’s instructions without ever asking a single question. Big mistake.

The different types of transplants are: 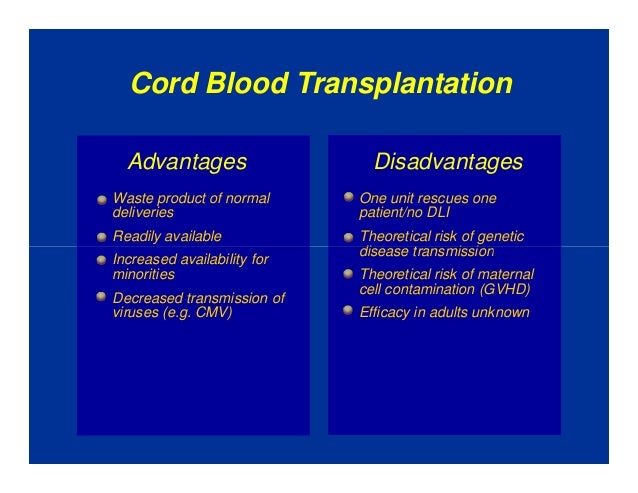 A cord-blood hematopoietic stem-cell transplantation is a complicated procedure with real risks and benefits. The key is to learn about complications and ways to combat those side effects and complications.

Have you undergone a cord blood stem cell transplant? What complications have you experienced? Please scroll down the page, post a question or comment and I will reply ASAP.

It is important to distinguish the new syndrome, which they call “cord colitis syndrome,” from other causes of diarrheal illness that have a similar initial presentation in this patient population – notably graft-versus-host disease (GVHD) – because treatment differs. Cord colitis syndrome responds rapidly to antibiotic therapy but tends to relapse when treatment stops, so a prolonged course is often necessary…

Severe diarrhea following hematopoietic stem-cell transplantation (HSCT) can almost always be traced to a variety of sources. Acute GVHD is perhaps the most well-recognized. Classic viral causes include cytomegalovirus and adenovirus, but more common pathogens such as rotavirus and norovirus are being recognized more frequently. Epstein-Barr virus can incite lymphoproliferative disease involving the gut, which produces diarrhea. And protozoal infections from giardia and cryptosporidium have been reported.

In addition, mucositis and neutropenic enterocolitis induced by conditioning regimens frequently cause diarrhea, as do Clostridium difficile infection and long-term medications, the investigators said…

Stool samples were negative for all bacterial, viral, fungal, protozoal, and parasitic organisms as well as toxins that were tested for. Nevertheless, patients showed a rapid response to empiric antibiotic therapy – usually metronidazole, either alone or in combination with a fluoroquinolone…

The investigators found no correlation between the cord colitis syndrome and factors such as patient age or race, the underlying hematologic disease, the conditioning regimen, or the regimen to prevent GVHD.”

“Background- Umbilical cord blood transplant (UCBT) is used for patients who do not have a matched donor, but engraftment often takes longer than with a standard allogeneic transplant, likely increasing the risk for infection. We characterized specific infections and outcomes in adults undergoing UCBT at our 2 centers.

Methods-All adults who underwent UCBT between January 1, 2006 and December 31, 2015 were included. Infectious episodes from 6 months before to 2 years after UCBT were reviewed.
Results-Fifty-seven patients underwent UCBT; 47 had neutrophil engraftment. A total of 179 infectious episodes occurred in 55 patients, 73 (41%) within 30 days post-UCBT. Viruses caused 85 (47%) infections. Cytomegalovirus caused 32 infectious episodes and was most common from day 30 to 100. Human herpesvirus 6 occurred in 28 episodes, was most common within 30 days, and caused 1 death. Bacteria were responsible for 82 (46%) infections, most commonly bacteremias due to Staphylococcus spp, Enterococcus spp, and Enterobacteriaceae. Of 11 invasive fungal infections, 9 were aspergillosis, 4 of which were fatal. Overall mortality was 56% in the first year. Thirteen deaths were from infection; 11 occurred in the first 100 days and 7 in the first 30 days post-UCBT. Of 10 patients who never engrafted, 9 died, 6 from infection, within 100 days post-UCBT.
Conclusions

Infectious complications were common after UCBT, especially in the first 30 days. Deaths from viral infections were fewer than expected. Delayed engraftment and nonengraftment continue to convey increased risk for fatal bacterial and fungal infections post-UCBT…’