This blog post is as much about collateral damage aka side effects as it is about curative cancer therapy for early stage oral cancer. I am writing the blog because cancer patients don’t know what they don’t know. It is common to be diagnosed with early stage oral cancer and  rely solely on your oncologist for a therapy plan. If this therapy plan include surgery and or radiation then you may be in for a lifetime of lowered quality of life. 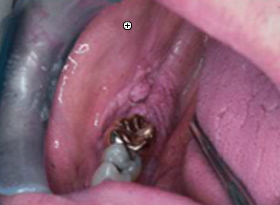 I am a cancer survivor and cancer coach. I underwent radiation to my neck when I was beginning treatment for my cancer back in early 1994. One of the many side effects I developed is called Xerostomia or dry mouth.

If you have any treatment for your oral cancer, you want to avoid dry mouth if you can. Believe me.

The studies linked and excerpted below cites photodynamic therapy (PDT) as well as evidence-based but non-conventional therapies as being effective in treating oral cancer as are other therapies but results in minimal side effect. Minimal collateral damage.

I am a long-term cancer survivor and a cancer coach. Please scroll down the page, post a question or comment and I will reply to you ASAP.

“Oral cancer, also known as mouth cancer,[1] is a type of head and neck cancer and is any cancerous tissue growth located in the oral cavity.[2]

There are several types of oral cancers, but around 90% are squamous cell carcinomas,[3] originating in the tissues that line the mouth and lips…

“Epidermal growth factor receptor (EGFR) is an effective molecular target of anti-cancer therapies. Curcumin is known to inhibit growth, invasion and metastasis by downregulating EGFR expression in some cancer cells.

In this study, we investigated the efficacy of curcumin on proliferation and invasion in SCC-25 cell line. We also explored the effect of curcumin on the activition of EGFR and its downstream signaling molecules Akt, ERK1/2 and STAT3.

We further revealed that curcumin regulated the p-EGFR and EGFR downstream signaling molecules including Akt, ERK1/2 and STAT3. Finally, our data showed that crucumin reduced the EGF-induced phosphorylation of EGFR and suppressed EGF-triggered SCC-25 cells invasion. Taken together, our results suggest that curcumin reduced SCC-25 cells proliferation and invasion through inhibiting the phosphorylation of EGFR and EGFR downstream signaling molecules Akt, ERK1/2 and STAT3…”

“According to new research from scientists at Queen Mary, University of London, Omega-3 fatty acids(n-3 PUFAs), contained in oily fish such as salmon and trout, selectively inhibit growth and induce cell death in early and late-stage oral and skin cancers.

In vitro tests showed that the omega-3 fatty acid eicosapentaenoic acidor EPA and its metabolite docosahexaenoic acid orDHA induced cell death in malignant and pre-malignant cells at doses which did not affect normal cells, suggesting they have the potential to be used in both the treatment and prevention of certain skin and oral cancers. Omega-3 polyunsaturated fatty acids cannot be made by humans in large quantities and so we must acquire them from our diet…”

“Resveratrol and quercetin are polyphenols which have been detected in significant amounts in green vegetables, citrus fruits and red grape wines. Beneficial effects attributed to these compounds include

The effect of resveratrol and quercetin on growth of human oral cancer cells is unknown. Resveratrol and quercetin, in concentrations of 1 to 100 microM, were incubated in triplicates with human oral squamous carcinoma cells SCC-25 in DMEM-HAM’s F-12 supplemented with fetal calf serum and antibiotics in an atmosphere of 5% CO2 in air at 37 degrees C for 72 h. Cell growth was determined by counting the number of viable cells with a hemocytometer.

We conclude that resveratrol or a combination of resveratrol and quercetin, in concentrations equivalent to that present in red wines, are effective inhibitors of oral squamous carcinoma cell (SCC-25) growth and proliferation, and warrant further investigation as cancer chemopreventive agents…”

My girlfriend has been diagnosed with high risk hpv 16 related cervical neoplastic growths.
I have noticed some small odd growths and a large painless tonsil to one side,
I am 20 and have only had these symptoms for a year or so at least I would assume.
Is there any benefit to me trying PDT now as a precaution , if I were to possibly eventually get oral cancer ?

Several things. My understanding is that cervical neoplastic grows as well as your own “small odd growths” are not cancer. Undergoing any therapy brings potential risks and side effects. Therefore, undergoing PDT would expose you to risks that only cancer patients would risk.

Secondly, while the research is preliminary, a nutritional supplement called AHCC, according to the article linked below, has been shown to get rid of HPV. The article doesn’t specify if all strains are eradicated but this simple therapy might be worth a try.

I wrote about this subject awhile ago- AHCC, HPV, Integrative Cervical Cancer Therapy

I read your Blog is a very useful for my knowledge Thank you for your great blog i really like it..

Hi David,
I came across your page here and am hopeful about the use of PDT.

I was just diagnosed with squamous cancer that first showed in my lymphnode at base of my neck on left side and after PET scan showed lesions on my tongue. It has not spread to anywhere else in my body.

I’ve searched the web and found many articles but can’t find which cancer centers are now doing this treatment. Can you help me. I see that Roswell Park Cancer Institute in NY is open for enrollment to a clinical trial.

Can you help me.
Thankyou,
David

You are correct. There are many articles on the Internet citing photodynamic therapy for squamous cell oral cancer. Yes, Roswell is running a clinical trial.

Are you saying that you do not want to go to Roswell for some reason? There are many oral cancers listed in the clinical trial description. The center must be experienced with the therapy.

If you do not want to go to upstate NY, let’s look at this a different way. Where do you live? I will search cancer centers that list PDT on their websites accordingly.