A diagnosis of advanced pancreatic cancer is tough. Only because conventional oncology has little to offer pancreatic cancer patients. I keep an eye out for outside the box thinking for incurable cancers because patients and caregivers often tell me that “they will do anything to treat their cancer.” Or something to that effect. 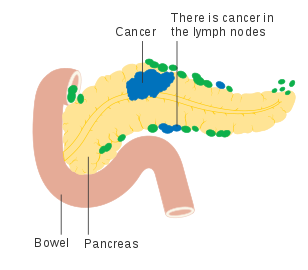 Keep in mind that my own cancer was also considered incurable by conventional oncology. I failed aggressive chemo and radiation. Back in 1997.

For a while now I have been co-workers with a pancreatic cancer survivor named Connie. Connie was diagnosed about three years ago. Good length of survival but not great… yet. The reason why I am talking about Connie is because she is in complete remission from her pancreatic cancer.

By undergoing local radiation Connie figured out how to shrink her PC tumor enough to become eligible for the Wipple Procedure.

For more information about managing your cancer- be it with conventional or non-conventional therapies scroll down the page, post a question or comment and I will reply ASAP.

“Among common cancers, pancreatic cancer has one of the poorest prognoses. Because pancreatic cancer often grows and spreads long before it causes any symptoms, only about 6% of patients are still alive five years after diagnosis…

Who Is a Candidate for the Whipple Procedure?

Only about 20% of pancreatic cancer patients are eligible for the Whipple procedure and other surgeries. These are usually patients whose tumors are confined to the head of the pancreas and haven’t spread into any nearby major blood vessels, the liver, lungs, or abdominal cavity. Intensive testing is usually necessary to identify possible candidates for the Whipple procedure…

Regardless of node status, most patients receive chemotherapy, radiation, or both after surgery. However, cancer specialists have differing opinions on the best combination and the best drugs to use.

It’s not yet known if therapy works better before or after surgery. But some research suggests that therapy could allow a few patients who are initially thought to be ineligible for surgery to eventually undergo the Whipple procedure. Studies are ongoing…

Purpose: Pancreatic cancer is almost always lethal, and the only U.S. Food and Drug Administration-approved therapies for it, gemcitabine and erlotinib, produce objective responses in <10% of patients. We evaluated the clinical biological effects of curcumin (diferuloylmethane), a plant-derived dietary ingredient with potent nuclear factor-kappaB (NF-kappaB) and tumor inhibitory properties, against advanced pancreatic cancer…

Results: Twenty-five patients were enrolled, with 21 evaluable for response. Circulating curcumin was detectable as drug in glucuronide and sulfate conjugate forms, albeit at low steady-state levels, suggesting poor oral bioavailability.

No toxicities were observed. Curcumin down-regulated expression of NF-kappaB, cyclooxygenase-2, and phosphorylated signal transducer and activator of transcription 3 in peripheral blood mononuclear cells from patients (most of whom had baseline levels considerably higher than those found in healthy volunteers). Whereas there was considerable interpatient variation in plasma curcumin levels, drug levels peaked at 22 to 41 ng/mL and remained relatively constant over the first 4 weeks.

Conclusions: Oral curcumin is well tolerated and, despite its limited absorption, has biological activity in some patients with pancreatic cancer.

3rd time around with PC. It has metastasized to the liver. The 5FU chemo was very toxic to my system. Am open to all and new treatments

I am sorry to learn of your pancreatic cancer relapse. Yes, 5-Fluorouracil‎ is a very toxic chemotherapy. Several questions below-

1) The post you came in on refers to “Tumor-treating fields” aka TTF. When combined with gemzar, another toxic chemotherapy, the article cites benefits to advanced pancreatic cancer patients.

2) There are other anti-oxidant supplements that studies have shown integrate with chemotherapies.

3) Further, there anti-angiogenic nutrition that may help fight your pancreatic cancer.

If you have interest in learning about any or all of the above mentioned therapies please go to PeopleBeatingCancerCoaching.org.

I am a cancer coach. Let me know if you have any questions.