The under-reporting of the possible side effects of heart damage from cancer drugs puts (myeloma) patients at an increased risk for heart failure, according to two researchers at the Stanford University School of Medicine.

Once you’ve been diagnosed with multiple myeloma, you may feel pressure to begin your therapy immediately. Your challenge will be multiple myeloma side effects. Please believe me when I say that learning about, anticipating and possibly preventing MM side effects is critical to your MM survival.

Your stage and symptoms such as bone pain, anemia, and kidney damage will often lead to your therapy plan.

Hopefully, you’ve gotten a second opinion — and an important but often overlooked step of this decision-making process is an evaluation of potential side-effects from the treatments you are considering.

Conventional cancer therapies such as surgery, chemotherapy, and radiation can cause collateral damage aka side effects. Some side-effects may be short-term and temporary such as hair loss and nausea. Some side-effects may be long-term. And some side effects can be late-stage and occur years after your treatment ends. I suffer from chemotherapy-induced heart damage causing atrial fibrillation (chronic A-Fib).

My afib began in the fall of 2010, 16 years after I had the induction chemo and autologous stem cell transplant that caused this late stage side effect!

The key for cancer survivors is to use knowledge of your therapies and try to identify short, long-term and late-stage side effects and then find supportive protocols to try to reduce or eliminate these side effects. 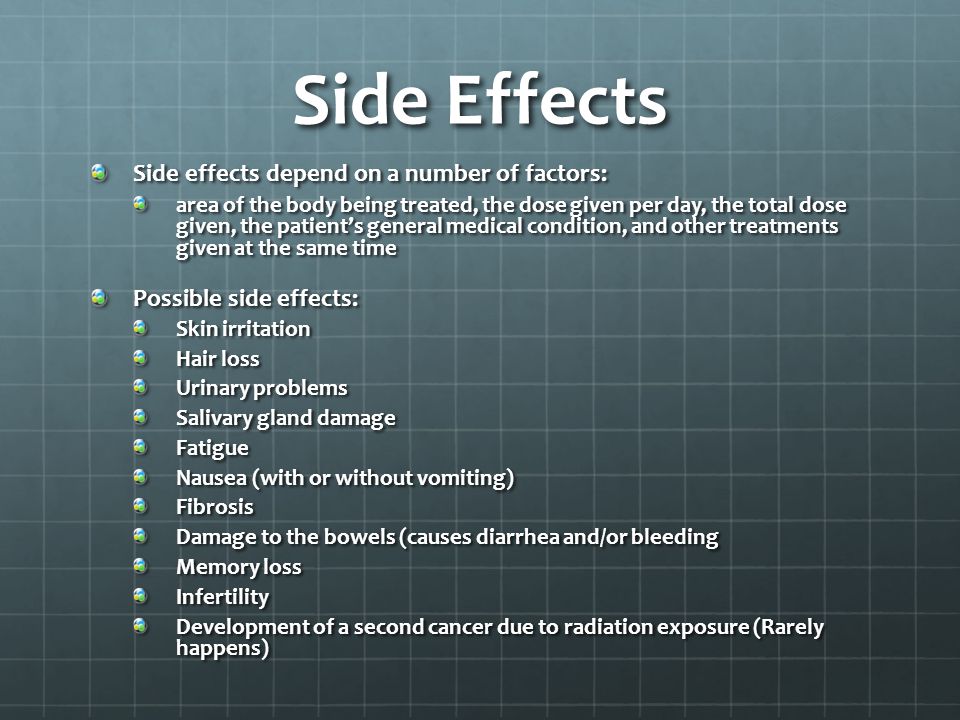 As the saying goes, “experience is the best teacher“ I have learned a lot about short, long-term and late-stage side effects from my surgery,  induction chemotherapy, radiation, and autologous stem cell transplant.

Learn about evidence-based, non-toxic therapies to reduce the risk of short, long-term and late-stage side effects.

Scroll to the bottom of the page and ask me a question. Knowledge is power for newly diagnosed myeloma patients.

What chemotherapy regimens are you considering? What treatment side effects are you currently dealing with? Please scroll down the page, post a question or a comment and I will reply to you ASAP.

Side Effects of Multiple Myeloma Treatment

“The most common side effects of multiple myeloma treatment include:

There are ways to treat them.

“We want patients to be able to stick to their routines to the extent that they’re able to,” says Sagar Lonial, MD, chief medical officer at the Winship CancerInstitute of Emory University.

To increase your odds of doing that:

Talk with your medical team about side effects before treatment begins. Avoid a Googling expedition. Ask your doctors which side effects you’re most likely to have. Also ask when they’ll probably happen and what can be done to ease them or keep them from happening at all.

“People get scared of the side effects before they’ve even had the drugs,” says Parameswaran Hari, MD, director of the Adult Blood and Marrow Transplant Program at the Medical College of Wisconsin. “I give patients only a list of common side effects and say, ‘You can expect them, but we can relieve them. There are rare side effects, too, so whatever you [have], call me.’”

Line up caregiving and emotional support. Because multiple myeloma gets worse over time, your needs probably will change. It’s important to find caregivers who can change with you..

Keep track of side effects — during and after treatment. Side effects, no matter when they happen, are an important part of your care, even if they seem insignificant at the time…

Communicate with your medical team. It doesn’t have to be your doctor.

“The team that’s caring for you can help you deal with some of the issues or concerns and provide reassurance,” Lonial says. “Everybody on your medical team has an area where they’re very good, and sometimes the non-physician can spend more time with you than the physician can…”

Pick an advocate. When Dickey was first diagnosed, his parents moved in with him to provide emotional support and help him make decisions about treatment…”

What is the newest Multiple Myeloma Therapy? - PeopleBeatingCancer says a couple of years ago

I now have a curvature and also have a fractured sternum after a fall in Feb. I have finished my cycles of chemo tablets. On my last cycle I noticed my hair coming out in clumps. Good to be off the drugs. Have compression on spine which has reduced my appetite. Lost 6 inches in height and 2 and a half stones in weight. Now off drugs back is sore at times and have discomfort and bone pain.

Good to read that you have completed chemo for now. Losing six inches is a lot. Please consider kyphoplasty or vertebroplasty and or physical therapy. Lastly consider evidence-based, non-toxic bone health therapies.

Hello David
My daughter travels abroad for treatment for late stage cervical cancer but has been plagued with side effects such as peripheral neuropathy and haemorrhagic cystitis. Both very painful and debilitating. I’m worried that she will be unable to travel for next phase of treatment.
Can you help please?

Helena- I replied to your email. David

I can not send message through your site

Good to speak with you earlier today. Good luck at Dana-Farber.

Hello – I watched your video and find what you are saying interesting. I was diagnosed 2 years ago was but on velcade dex…which worked for 2 years. Now I am going on Empliciti and revlimid dex. I want to know what supplements will help and if any are contraindicated – since I take many. My myeloma specialty oncologist does not seem keen on supplements…and I am wondering about the use of CBD with my new protocol. You mentioned a code to get $100 off a package – is that still offered? Thank you

I sorry to read of your MM diagnosis. Both green tea and vitamin C are contraindicated for Velcade (bortezomib). But if you have discontinued Velcade that you are okay. The integrative therapy guide (part of the MM CC program) lists those evidence-based supplements that work with Revlimid and Dexamethasone. Further, the MM CC supplementation guide lists 13 different non-toxic supplements that studies have shown are cytotoxic to MM.

Regarding CBD or other supplements that may or may not be contraindicated with Empliciti, I would have to research this as this is a fairly new MM chemotherapy.

Re the code, yes, it is available to you. Please type “webinar” in the box when you purchase either MM CC program. I look forward to working with you. We can discuss the theory behind conventional oncology’s thinking about antioxidant supplementation.

David I am trying to contact you but your contact me does not work. Please tell me how to reach you.

Hi Nanz-
My email address is David.peoplebeatingcancer@gmail.com.
thanks
David

Good luck and keep me posted…

I was diagnosed with Multiple Myeloma on May 16th. Obviously a devasting day. I refuse to research my disease as it scares me severely. I am 2 weeks from my 40th birthday and have been 100% healthy to this point. My local hospital decided to start me on Velcade and sent me home. Reluctant to accept the diagnosis, I made an apt at Mayo Clinic and was able to get in 5 days later. I showed up at their doors in complete renal failure, anemia, hypocalcuimia (*sp?) . I was admitted imeadiatly and had plasmaphoresis that afternoon.I am currently on a Velcade and Revilamid regiment. I am so tired all the time, do you know of any sucessful ways people have dealt with this. I am used to being very active and this is really wearing on me mentally.
Thanks in advance for any advice.
Jesse Wadsworth

Mayo is a top-notch institution for conventional therapies. My guess is that your RVd induction therapy will stabilize your MM. From your assessment of your original condition you were probably stage 3. Induction therapy should put you into remission allowing your red blood cells to grow so that you have more energy. In addition, putting your MM into remission will stop your bones from dissolving and should stop your kidney damage.

Ironically your age at diagnosis is a positive prognostic indicator. Translation…on average young MMers live longer. I was diagnosed at 34. I encourage you to learn how to balance the toxicity of conventional MM therapies with non-toxic therapies. Please don’t expect your oncologist to talk to you at length about the short, long-term and late stage side effects of chemotherapy, radiation and or an autologous stem cell transplant.

Yes, I know of successful ways of living with MM. After several years of aggressive conventional therapies myself, from ’94-’97 I began undergoing evidence-based, non-toxic therapies- As an example, curcumin has been shown to be cytotoxic to MM as well as integrative to revlimid. Meaning cucumin enhances the efficacy of this chemotherapy.

Let me know if you would like to learn more about anti-MM supplementation, diet, integrative therapies, bone health therapies, etc.

Good luck and hang in there,

I am a member and have been trying to email you for the past week and can’t get the email to go thru. I don’t even know how to get on a members site. I have’nt received any news letters either.

I replied to both of your questions last week. What can I do for you?

David, I recently ha an increase in m spike from 1.5 to 1.7. Gamma globulin was high and out of range. Can you please let me know the right foods to eat or stay away from, especially to decrease gamma globulin?? Please answer as thoroughly as you can. I do expect to sign up for your webinar.
Thanks so much. Barbara Paul

I will email the MM Cancer Coaching Guide that discusses “Nutrition” to your email address. Further, I encourage you to employe not just anti-MM nutrition but evidence-based, anti-MM supplementation, bone health, lifestyle, etc. therapies as well. The other MM CC guides speak to these therapies as well.

Lastly my experience is that MM responds best when it is at a low level like yours. As you probably know, an m=spike as low as yours is “pre-MM” and not frank MM at this stage. I work with two MGUS survivors who have lowered their m-spikes a tiny bit through non-toxic therapies.

[…] The article linked and excerpted below from OncologyNurseAdvisor however, explains a dramatic problem for pediatric oncology survivors. And that problem is the long-term and late stage side effects of toxic therapies. […]

Cancer Practices that Must Stop says 7 years ago

[…] “practice” is simply “what is the chance that this will cure me?” And ask “what are the potential side effects?” If you don’t get a clear, understandable answer, do not proceed with the […]

Your Cancer Diagnosis and Prognosis - PeopleBeatingCancer says 7 years ago

[…] Can surgery remove all of the cancer and eliminate the need for chemotherapy or radiation? Toxic therapies usually lead to side-effects. […]

[…] From the time he/she delivers the news, “you have cancer,” to explaining therapies, side effects, diagnostics, and more, you must rely on your oncologist for accurate, fair, honest information […]