Mental Health is as important as Physical Health in Multiple Myeloma Patients.

I am a long-term survivor of an incurable cancer called Multiple Myeloma (MM). I believe that in order for MM patients and survivors to manage their MM they should learn about the spectrum of evidence-based therapies, both conventional and non-conventional. Because of articles like the one linked below I’ve come to believe that multiple myeloma survival depends as much on our minds as out bodies. 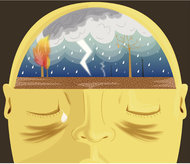 In other words, MM survivors must focus on therapies for our mental health every bit as much as therapies for our physical health.  Though I may not be a medical professional I am a very long- term survivor of an incurable cancer. So I must be doing something right.

The MM Mind-Body Therapies Guide is a compilation of what I do to manage my mental health. Every therapy is supported by research. I do what I do based on evidence.

Are you a multiple myeloma survivor? If you would like to talk to me about your cancer, scroll down the the bottom of the page, post a question or a comment and I will reply to you ASAP.

“Psychological distress may increase your chances of dying from cancer.

Researchers interviewed 163,363 adults in England and Scotland using well-validated questionnaires on general and mental health. They followed the population in 16 studies conducted between 1994 and 2008.

After controlling for age, smoking, physical activity and other factors, they found that compared with those with the lowest scores on depression and anxiety, those with the highest had higher rates of cancer death. The associations were particularly strong for colon and rectal, prostate, pancreatic and esophageal cancers, and for leukemia. In instances of colorectal and prostate cancer, they found a “dose-response” effect: the greater the distress, the greater the likelihood of death from those cancers.

People might have had undiagnosed cancer at the start of the study, which would affect their mood, so the researchers accounted for this possibility by doing an analysis that excluded study members who died of cancer in the first five years. The results were largely the same.

The study, in BMJ, is observational so cannot determine cause and effect, and it depended in part on self-reports. “The extent to which these associations could be causal,” the authors write, “requires further testing with alternative study designs.””

Multiple Myeloma Diagnosis- End-stage Running out of Options? - PeopleBeatingCancer says a couple of years ago

In January of 2017, I was in a stressful situation. I didn’t eat or sleep much at all and my immune system went down. A few months later in April I discovered I had Multiple Myeloma as well as Thyroid and colon cancer, all this discovered in april. Is there a link with my stress in January and beyond and the development of the Myeloma?

While the link is not well understood or well researched, yes, there is a link between stress and cancer. MM being a cancer of the immune system, it is most often linked with depressed immune function. To be specific, stress causes increased blood levels of cortisol when then makes the body more susceptible to cancer.

I encourage you to add those therapies shown to enhance your immune function- nutrition, exercise, sleep, nutritional supplementation.

Further, I encourage you to employ those conventional (FDA approved) therapies that will reduce or debulk your cancers in order to give your immune system a fighting chance.

Yes, a MM diagnosis requires learning a dizzying amount of info about therapies, side effects, oncology, etc. Do not fault yourself for making bad decisions as you say.

One of my own bad decisions was to have an autologous stem cell transplant. I was in remission for less than a year. I developed chemo-induced heart, brain and nerve damage in the insuing years. Bad decision…

What is your current MM status? Are you in or out of remission? What symptoms are you experiencing?

I have been in remission from MM for about a year and all seemed to be going well until a month ago when depression took over my life and all I want to do is stay in bed all day. I have been hoping to come out of it an Are on many medications that aren’t helping. Any suggestions-Thanks
Dale

I am sorry to learn of your MM diagnosis as well as your depression. Yes, taking many medications probably don’t help. I will email the MM cancer coaching guide about mind-body therapies for MMers. The only other advice I can give a fellow MMer is about my own lifestyle therapies that make me feel good as well as help me remain in CR from my MM- daily moderate exercise, nutrition, supplementation, detoxification, etc.

I am emailing the mind-body guide now. Hang in there,