They found the incidence of oligoclonal patterns (causing confusion) was significantly higher in multiple myeloma patients who had an autologous stem cell transplant than the patients who had chemotherapy alone: 57.9 percent compared to 8.8 percent. 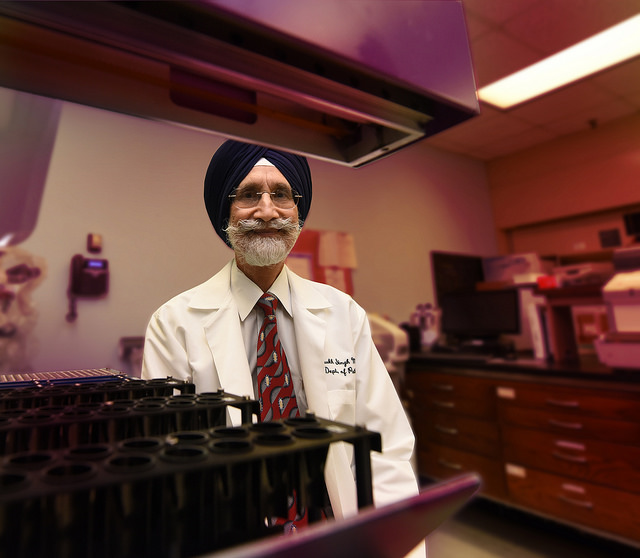 Let me get this straight. Dr. Singh (pictured to the left) is pointing out that the confusion caused by elaborate testing of multiple myeloma patients is due to autologous stem cell transplant (ASCT)?

Could Dr. Singh also be thinking about the fact that autologous stem cell transplant does not lead to longer average overall survival in myeloma patients?

Countless studies confirm that ASCT does not result in longer overall survival (OS-length of life) but it can lead to longer progression-free survival (PFS-remission).

Or that the myeloma specialist who has the longest average overall survival statistics, Dr. James Berenson, does not believe in autologous stem cell transplantation? At all? Ever?

I’m not trying to bad mouth all MM oncologists. Most of the doctors that I know are well-trained, hard-working clinicians. What I am saying is that oncology is a business.

I am one of those patients. I am a long-term MM survivor and MM cancer coach. My conventional therapies led to remissions, relapses and a diagnosis of terminal MM.

I achieved a complete remission after undergoing an experimental therapy about a year and a half later. I have remained in complete remission from my “incurable” cancer by living an evidence-based, non-toxic, anti-MM lifestyle through nutrition, supplementation, bone health, detoxification and other therapies.

Have you been diagnosed with MM? What stage? Please scroll down the page, post a question or comment and I will reply to you ASAP.

“With multiple myeloma, the cells start primarily producing instead a singular product, called a monoclonal antibody, or M spike, that leaves patients vulnerable for serious infections, like pneumonia, and can even eat away at their bones…

Sophisticated laboratory tests used to both diagnose the disease then follow treatment response, can send confusing messages to patients and their physicians, particularly after stem cell therapy to try to restore a healthy antibody mix, says Dr. Gurmukh Singh…

The M spike stands out as a distinctive, dense band of color among the layers of protein groups, while typical antibody levels create bands of lighter smears…

They found the incidence of oligoclonal patterns (causing confusion) was significantly higher in patients who had a stem cell transplant than the patients who had chemotherapy alone: 57.9 percent compared to 8.8 percent. Only five of the 159 patients who received a transplant had an oligoclonal pattern before treatment but 92 had one afterward. More than half of the the oligoconal patterns developed within the first year following a transplant. The earliest pattern was detected at two months – as soon as the first post-transplant tests were done—and a few occurred as long as five years later…”