I’ve been living with aka surviving multiple myeloma since early 1994. I have weathered all forms of cancer therapy- conventional, integrative and alternative. I’m here to tell you that aggressive toxic chemotherapy and radiation ages you…at least a decade or more. The side effects of toxic therapies are hard on your skin… 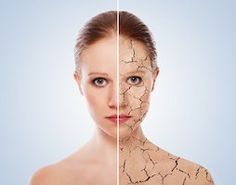 So reaching mid-life (I was born 12/24/59) and not liking what I saw in the mirror each morning, I decided to, ah, moisturize. I want to go on record and say that I moderately exercise, eat well and supplement with a variety of nutritional supplements like omega-3 fatty acids, as well. But I’ve pursued these therapies to reduce my risk of MM relapse and to manage the many side effects that I now live with.

Like everything else on PeopleBeatingCancer, I decided that I needed “evidence-based” research to support whatever therapy I chose to make my skin look healthier. Please read the study linked and excerpted below citing skin cream containing 5% alpha-lipoic acid as being superior to skin cream not containing 5% ALA.

The next study linked and excerpted below cites DMAE as having “documented increase in skin firmness with possible improvement in underlying facial muscle tone” both of which my face needs.

The third ingredient that I researched as being important to skin health is vitamin C ester. The first thousand or so links in my Google search turned up links to skin creams containing vitamin C ester- no formal research but lots of anecdotal evidence…

for the past month and it works. My skin looks healthier aka younger. I’m a little happier with what I see in the mirror each morning now.

For more information on nutritional supplementation to reduce the risk of multiple myeloma relapse, scroll down the page, post a question and I will reply ASAP.

“OBJECTIVE: The purpose of this study was to investigate whether a cream containing 5% ALA showed any advantages concerning a number of the criteria associated with ageing of the facial skin, compared with an identical cream lacking LA…

MATERIAL AND METHODS:Thirty-three women, mean age 54.4 years, were included in this controlled study…The following methods of assessment were used: self-evaluation by the test subjects, clinical evaluation, photographic evaluation and laser profilometry. Profilometry was performed before the start of treatment and at the end…

CONCLUSIONS: it is indicated that 12 weeks of treatment with a cream containing 5% ALA improves clinical characteristics related to photoageing of facial skin.”

The role of dimethylaminoethanol (DMAE) in cosmetic dermatology.

“Thus, the benefits of DMAE in dermatology include a potential anti-inflammatory effect and a documented increase in skin firmness with possible improvement in underlying facial muscle tone…”

Exercise not only appears to keep skin younger, it may also even reverse skin aging in people who start exercising late in life, according to surprising new research.

As many of us know from woeful experience, our skin changes as the years advance, resulting in wrinkles, crow’s feet and sagging. This occurs because of changes within our layers of skin. After about age 40, most of us begin to experience a thickening of our stratum corneum, the final, protective, outer layer of the epidermis, itself the top layer of your skin. The stratum corneum is the portion of the skin that you see and feel. Composed mostly of dead skin cells and some collagen, it gets drier, flakier and denser with age.

At the same time, the layer of skin beneath the epidermis, the dermis, begins to thin. It loses cells and elasticity, giving the skin a more translucent and often saggier appearance.

These changes are independent of any skin damage from the sun. They are solely the result of the passage of time…

Of course, we humans long ago swapped our fur for naked skin. But if exercise could keep animals’ outer layer from changing with age, it might, the researchers speculated, do the same for our skin…

But as the researchers realized, other factors, including diet, genes and lifestyles, might have influenced the differences in skin condition between the exercising and sedentary groups. It was impossible to know whether exercise by itself had affected people’s skin or been incidental to lucky genetics and healthy lives…

How exercise changes skin composition is not completely clear, but in a separate portion of the study, the researchers checked for alterations in the levels of certain substances created by working muscles. Called myokines, these substances are known to enter the bloodstream and jump-start changes in cells far from the muscles themselves. In this case, the scientists found greatly augmented levels of a myokine called IL-15 in the skin samples of volunteers after exercise. Their skin samples contained almost 50 percent more IL-15 after they had been exercising than at the start of the study.

The researchers suspect that additional myokines and substances are also involved in the skin changes related to exercise, Dr. Tarnopolsky said, making it unlikely that any IL-15 pill, salve or injection will ever replicate the skin benefits of a workout.

Nor is there evidence that exercise reverses wrinkling and other damage from the sun, some of which many of us accumulate during outdoor exercise. Still, Dr. Tarnopolsky said, “it is astonishing to consider all of the intricate ways in which exercise changes our bodies” —including the skin beneath our shorts.