I read the article linked and excerpted below in the Wall Street Journal. Two things discussed the the article annoyed me (and might annoy you to if you have been diagnosed with Idiopathic Pulmonary Fibrosis (IPF)).

First of all, when any disease is termed “incurable” it just means that conventional medicine can’t offer much hope for effective treatment. My cancer, multiple myeloma is incurable too. I was diagnosed in ’94 so the issue for me is more about quality of life not quantity of life. 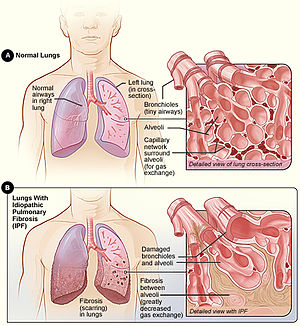 I don’t blame medical doctors for not knowing much about a given disease. No known cause, no therapies, heck, conventional medicine doesn’t even really know how many people have Idiopathic Pulmonary Fibrosis!

Secondly, the WSJ article below talks mainly about conventional therapies. Expensive drugs that often cause a host of side effects and may reduce quantity of life.

Difficulty breathing deeply is a quality of life issue. Sure, if you heal you lungs you will be able to breath deeply. But if you use an Oxygen Concentrator

you can live with A-fib, impaired lung function or IPF and still breath deeply. Increasing your oxygen intake not only makes you feel better but helps your brain and just plain relaxes you.

I supplement with Life Extension N-Acetyl Cysteine. NAC enhances my quality of life as well according to the articles below. And I exercise moderately.

I bought an Oxygen Concentrator

in 2010. I have in the spare bedroom and use it when I read and nap. My dad uses his oxygen concentrator throughout the day. Dad naps a lot during the day…

. The oxygen will enhance your quality of life.

Breathing oxygen whenever you need to take a deep breath will definitely improve your quality of life. Who knows, you may even live longer.

For more information about managing chronic disease, scroll down the page, post a question or comment and I will reply ASAP.

“Idiopathic pulmonary fibrosis (IPF) is a chronic irreversible and ultimately fatal disease characterized by a progressive decline in lung function.[2][3] The term pulmonary fibrosis means scarring of lung tissue and is the cause of worsening dyspnea (shortness of breath). Fibrosis is usually associated with a poor prognosis…

N-Acetylcysteine (NAC) is a precursor to glutathione, an antioxidant. It has been hypothesized that treatment with high doses of NAC may repair an oxidant–antioxidant imbalance that occurs in the lung tissue of patients with IPF…”

Historically more men have been diagnosed, but IPF in women is increasing. It kills about 40,000 patients each year, the same number that die of breast cancer. Only half survive more than two to three years from the initial diagnosis as their lungs stop working, from causes including respiratory failure and pneumonia…”

[…] Idiopathic Pulmonary Fibrosis and your Quality of Life […]

I was diagnosed in 2013 with pulmonary fibrosis and in early 2014 was told it was idiopathic pulmonary fibrosis (IPF). Next thing I found was I would need to carry around oxygen wherever I went and use it at home and while I slept. I was given a couple of years. In 2018 I was told by a holistic nurse practitioner to try multivitamin herbal treatment because my condition was getting worse. I used the herbal formula in March 2018. My lifestyle has changed since all this began. I consume no alcohol, walk more than I used to and without oxygen, and am able to control my weight much better than before.All of this has changed. I exercise and walk daily, play catch and dance with my grandchildren, I use the organic remedy for over 4 month without any further usage or side effects . I can only speak for myself, but I highly recommend www multivitamincare. org treatment for those who know the feeling of gasping for air as I did.

Great to read that you are doing well because of multivitamin care. I was recently doing some research on pulmonary fibrosis (friend of mine had a long covid side effect of this…) and hyperbaric oxygen therapy, according to research, improved this health condition.