While there is a long and growing list of FDA approved chemotherapy regimens for MM such as Velcade and Carfilzomib (kyprolis), there are evidence-based, “integrative therapies” for MM that have been shown to enhance the efficacy of chemo while reducing the risk of side effects.

Cannabidiol or CBD is an integrative multiple myeloma therapy. 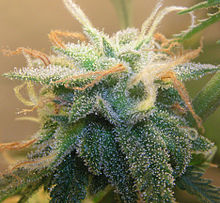 Cannabidiol is one of many evidence-based, non-conventional MM therapies shown to be cytotoxic to MM, and shown to integrate with MM chemotherapies such as Velcade, Revlimid, Cytoxan, Melphalan and Dexamethasone.

There are a host of evidence-based, non-toxic MM therapies for you to consider.

“These results showed that CBD by itself or in synergy with BORT strongly inhibited growth, arrested cell cycle progression and induced MM cells death by regulating the ERK, AKT and NF-κB pathways with major effects in TRPV2+ cells. These data provide a rationale for using CBD to increase the activity of proteasome inhibitors in MM.”

“Cannabidiol, a non-psychotropic component of marijuana, may enhance the healing process of bone fissures, according to a new study…

We found that CBD alone makes bones stronger during healing, enhancing the maturation of the collagenous matrix, which provides the basis for new mineralization of bone tissue. After being treated with CBD, the healed bone will be harder to break in the future.“”

Cannabinoids in the management of difficult to treat pain

“Cannabinoids may offer significant “side benefits” beyond analgesia. These include anti-emetic effects, well established with THC, but additionally demonstrated for CBD (Pertwee 2005), the ability of THC and CBD to produce apoptosis in malignant cells and inhibit cancer-induced angiogenesis (Kogan 2005; Ligresti et al 2006), as well as the neuroprotective antioxidant properties of the two substances (Hampson et al 1998), and improvements in symptomatic insomnia (Russo et al 2007)…”

A myeloma diagnosis results in induction therapy (perhaps RVd), MM remission, an autologous stem cell transplant, and another, hopefully, deeper MM remission. While research has never confirmed that ASCT provides a longer overall survival (OS), research does demonstrate that the average PFS or remission is longer with an ASCT.

But now you are coming out of remission…does this mean that you are running out of therapy options? Am I nearer to the end than the beginning? Conventional wisdom says that your next remission will be shorter than your first.  Just as important, you have suffered several short, long-term and late stage side effects.  You are tired of the side effects that come from chemotherapy.

So what’s a relapsed/refractory MMer to do? Your oncologist is suggesting carfilzomib but you’ve heard about the difficult toxicity and side effects of this chemotherapy regimen.

According to the two studies linked and excerpted below, CBD and curcumin act synergistically to both enhance the MM killing action of CFZ as well as reduce the toxicity of CFZ. But maybe you are wondering if either/or of these integrative therapies can interfere with the efficacy of carfilzomib.

To be fair, the studies below are “in vitro” meaning they take place in a test tube. No pharmaceutical company in existance is going to test a unpatentable  product like curcumin or CBD in human beings. To a large extent, myeloma patients and survivors are on their own in the latter stages of their incurable disease.

“Herein, we also found that the CBD and THC combination is able to reduce expression of the β5i subunit as well as to act in synergy with Carfilzomib (CFZ) to increase MM cell death and inhibits cell migration. In summary, these results proved that this combination exerts strong anti-myeloma activities…

In multiple myeloma, our previous findings demonstrated that CBD reduced cell proliferation and induced necrotic cell death [11]. In the present study, our data on THC and mainly on the THC-CBD combination as stimulatory factors of autophagic-dependent cell death in MM cell lines, support previous data regarding the efficacy of cannabinoids as anti-tumoral drugs, in different human cancer models.

For cannabinoids, different experimental data suggested that the combined administration of cannabinoids with other anti-cancer drugs, could act synergistically, to reduce tumor growth and chemoresistance...

In MM cells, the CBD and Bortezomib (BTZ) combination was found to be more effective compared with BTZ alone and to act synergistically in inducing cell death [11].

Herein we investigated the effect of CBD and THC in combination with CFZ, showing a synergistic effect between the three drugs, supporting the fact that combining THC-CBD with established cytotoxic agents should result in a higher level of anticancer activity compared with that of cytotoxic agents acting alone…

Therefore, a combination therapy including cannabinoids and chemotherapeutic drugs could allow the reduction of chemotherapeutical doses administered in patients, without affecting the antitumoral therapy...

Curcumin ameliorates the in vitro efficacy of carfilzomib in human multiple myeloma U266 cells targeting p53 and NF-κB pathways.

Herein, we investigated if combination of curcumin with carfilzomib (CFZ) can induce a better cytotoxic effect on in vitro cultured U266 cells. Cell viability data showed that curcumin significantly ameliorates CFZ cytotoxic effect.

Furthermore, curcumin alone did not affect proteasome at the tested dose, confirming the involvement of different mechanisms in the observed effects. U266 cells exposure to curcumin or carfilzomib (CFZ) increased reactive species (RS) levels, although their production did not appear further potentiated following drugs combination.

Interestingly, NF-κB nuclear accumulation was reduced by treatment with CFZ or curcumin, and was more deeply decreased in cells treated with CFZ-curcumin combinations, very likely due to the different mechanisms through which they target NF-κB.

Our results confirmed the induction of p53/p21 axis and G0/G1 cell cycle arrest in anticancer activities of both drugs, an effect more pronounced for the CFZ-curcumin tested combinations.

These findings evidence that curcumin can ameliorate CFZ efficacy, and lead us to hypothesize that this effect might be useful to optimize CFZ therapy in MM patients.”

Greetings David, My Dad went into remission, according to his Oncologist. So he removed him from the Valcade and Revlimid. Three weeks ago he started him on Ninlaro. It’s dosage frequency is once a week. It gave him pretty much the symptoms described in the literature they gave me. Diarrhea, Nausea, etc. It completely destroyed my father. It dropped his Nutrophils to a third of what it was and also his WBC and Platelets. My Dad is slowly coming out of the drug effects and I want to get him back to where he was. He continues using the CBD Tinctures three times a day. My question is: Is there anything besides Pharma drugs that will help him? Can CBD by itself and a clean organic diet (no red meats) keep the Myeloma from continuing to grow? Thanks

I am sorry to read of your dad’s chemo-induced side effects. I’m not sure if your question about “helping” you dad is about side effects in general, side effects of Ninlaro or managing MM in general.

In short, evidence-based non-conventional therapies such as diet or nutritional supplementation, have been shown to cause apoptosis (kill) MM. In my experience, the key is to manage MM with a combination of occasional low-dose chemo and combine it with diet, therapies such as CBD, lifestyle, etc.

To address your last question, many therapies- from chemo to diet, have been shown to slow the growth of MM cells. But slowing the grown is not permanent. It is a manner of managing your dad’s MM to balance quality of life issues.

What kind of CBD oil and curcumin do you use?

Hi Tama- I will reply to your email and include this question/reply-
thanks,
David

What is the best CBD oil or tincture to take for MM and how much should be taken a day as I am have trouble finding this information.

Hi Mary- I replied to you via your email address-

Hello could you help me I’m now 47 I got diagnosed with MM in 2017 I had a accident at work broke my bank and that’s how they found it for six months I injected my self with chemo had Dexamethazone and Thalidomide tablets to reduce a tumour on my lower spine and suppress my immune system. They then fixed my vertebrae. After that I had my stem cell harvest 3 months recovery then thank God my brother was a match and went on to have his bone marrow stem cells. I was doing well but suffered a bit with GVHD . After a year in half I had my check ups then this COVID came about didn’t go to hospital for a wile and as things calmed down they called me back for a marrow biopsy. Then unfortunately they rang and said it come back a little bit. So they have put me on chemo tablets for 3 months they said I’m on my 2nd month they called me in to hospital today to have a top up of my brothers stem cell but they wouldn’t do it because I had GVHD probably through the chemo tablets. I’ve had enough of all the tablets I’ve been putting in my boddy as in antibiotics . I have some thc and cbd I’ve been wanting to do this for ages so I’m starting is it ok to do it along side me chemo tables and thyroid tablets . Hope to hear from u soon

unresponsive to chemotherapy says a couple of years ago

Multiple Myeloma Treatment Side Effects says a couple of years ago

Continuous Treatment aka Metronomic Therapy for New Myeloma? - PeopleBeatingCancer says a couple of years ago

My mom has colon cancer. And a mass on her liver. live in Minnesota. Prior lake area. Help me find out what best combination is and how I can get it, please.

I am sorry to read of your mom’s metastatic colon cancer. When you ask “Help me find out what best combination is…” are you asking about CBD oil, cannabinoids and THC mixture? I am a cancer survivor and cancer coach specializing in integrative therapies. I believe your mom’s greatest hope is to integrate conventional and non-conventional therapies. The article linked below is an example of integrative therapies.

CBD oil is another example. Let me know if you would like to learn more about integrative cancer coaching.